The Day the Angels Fell by Shawn Smucker 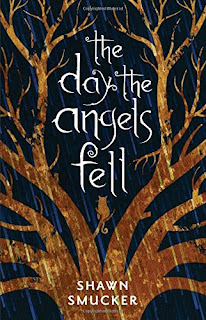 Shawn Smucker isn't new to the world of books. He is known for his non-fiction books and biographies, but this book is his introduction to the world of fiction, his very first novel. The Day the Angels Fell is a wonderful story about Samuel Chambers, who losses his mother during a freak accident in the middle of summer. This one act sets the rest of his summer in motion towards an epic ending and takes his on a journey he would have never been able to imagine had he not lived it himself.

There are many authors who tackle the subject of death, but none, I  feel, with more reality than Smucker. He has taken and captured all of the emotions that death evokes into his main character. You watch Sam go through anger, hope, happiness, and despair. He encompasses the entire gamut of grief, all the while searching for the one thing he believes can be the solution to his situation, which only intensifies his feelings and emotions.

This book was an extremely enjoyable read. Smucker keeps the reader engaged during the entire book, right up to the very last page. There is so much going on with the themes of life and death, good versus evil, young and old, that once you start reading, you are pulled in and never let go till the last sentence. Even then, you can see that he has set he book up for a sequel and after doing some research, I see that there will indeed be a next book and I have to say...I can't wait!

The one thing that stood out to be that I have found hard for other authors to do in the past was to write a story from different time frames. There are times where Sam is an old man and you are in his current day and then you are transported back to his childhood to relive the worst summer of his life. Smucker takes these two eras and blends them beautifully. The book flowed exactly like I would have hoped and it never once felt disjointed or jerky. The reader moved seamlessly through the two time frames with an ease that I haven't seen in writing in a long time.

I have not read a fiction book in a long time that I loved as much as this one. For Smucker's debut novel, I  have to say that I think he made a HUGE splash on the fiction scene. His writing is amazing and I am looking forward to the sequel to The Day The Angels Fell.

{Disclaimer: I received a complimentary copy of this book from the publisher in exchange for an honest review. All thoughts and opinions are my own.}
Labels: adult fiction