The Princess Spy by Melanie Dickerson 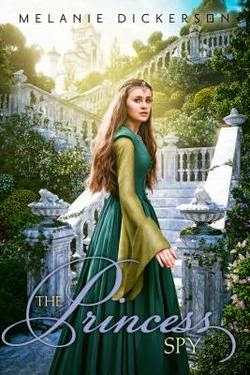 Margaretha has always been a romantic, and hopes her newest suitor, Lord Claybrook, is destined to be her one true love. But then an injured man is brought to Hagenheim Castle, claiming to be an English lord who was attacked by Claybrook and left for dead. And only Margaretha--one of the few who speaks his language--understands the wild story.
Margaretha finds herself unable to pass Colin's message along to her father, the duke, and convinces herself "Lord Colin" is just an addled stranger. Then Colin retrieves an heirloom she lost in a well, and asks her to spy on Claybrook as repayment. Margaretha knows she could never be a spy--not only is she unable to keep anything secret, she's sure Colin is completely wrong about her potential betrothed. Though when Margaretha overhears Claybrook one day, she discovers her romantic notions may have been clouding her judgment about not only Colin but Claybrook as well. It is up to her to save her father and Hagenheim itself from Claybrook's wicked plot.

The Princess Spy by Melanie Dickerson was a fantastic novel of filled with romance, love, and excitement.  I loved the medieval setting as I have always had a fondness with that era.   My kiddo started reading this story and really liked it even though I felt it would be written more for a female audience, but he really enjoyed reading it. Even though it is written for a teen audience, I actually enjoyed the story as well.

Now, I am not familiar with Melanie Dickerson, but from my understanding there are books that were precursors to this one and would probably enrich the characters within this story, but the book itself stand on it’s own.  After reading The Princess Spy, I think I just might have to go find her other books and read them, then re-read The Princess Spy for the full experience.

{Disclaimer: I received a complimentary copy of this book from Zondervan Z Squad in exchange for an honest review.}
Labels: fiction teen